Yaakov Lappin, Jerusalem Post, Israel, Iran wage cyber warfare in the battlefield of the future " What may begin as an enemy intelligence-gathering mission could later turn into a virus that disrupts military operations." Analysis and speculation
Posted by GRB at 17:19

usnews.com, Iran's Dubious Digital Revolution "Iranian President Hassan Rouhani has taken steps to reach the country's powerful youth constituency since his election in June 2013, using Twitter and talking about the importance of the Internet in an effort to connect. The country has a young, tech-savvy population, more than half of which is under the age of 30, making it an important voice in determining the country's future."
Posted by GRB at 17:18

venturebeat.com, Facebook has no comment for the eight Iranians sentenced to long prison terms for posting messages, "This week, eight Iranian students and adults were slapped with jail sentences ranging from seven to twenty years in prison for posting Facebook messages deemed inflammatory by the Islamic government. Their fate elicited a “no comment” Thursday from the Menlo Park-based company."
Posted by GRB at 17:17

Little Chechnya on the Steppes

BBC Radio 4, Little Chechnya on the Steppes, "Award-winning travel writer Oliver Bullough journeys into the frozen heart of Central Asia to meet the 'White Hats'. This exiled community of Chechens survived everything that Stalin threw at them and now live an isolated and ascetic life on the steppes of Kazakhstan."
Posted by GRB at 16:17

KU Leuven - Call for Papers: Social Networking in Cyber Spaces: European Muslim's Participation in (New) Media, 27-28 November 2014. "The increasing growth of the Internet is reshaping Islamic communities worldwide. Non-conventional media and social networks such as Facebook and Twitter are becoming more popular among the Muslim youth as among all parts of the society. The new channels of information and news attract new Muslim publics in Europe. The profile of the people using these networks range from college students to Islamic intellectual authorities. Such an easy and speedy way of connecting to millions of people across the globe also attracts the attention of social movements, which utilize these networks to spread their message to a wider public. Many Muslim networks and social movements, political leaders, Islamic institutions and authorities use these new media spaces to address wider Muslim and also non-Muslim communities, it is not uncommon that they also address and reach certain so-called radical groups."

Sounds interesting (+familiar territory for several readers of these pages)
Posted by GRB at 13:55

"In an unprecedented, three-year cyber espionage campaign, Iranian hackers created false social networking accounts and a fake news website to spy on military and political leaders in the United States, Israel and other countries, a cyber-intelligence firm said on Thursday."
Posted by GRB at 20:51

Allegations re ballot stuffing (in Egypt)

Why the Internet Is Not Increasing Terrorism

Why are Iranian men wearing the hijab?

alarabiya.net, Why are Iranian men wearing the hijab? "Earlier this month, Iranian women flooded Facebook with pictures of themselves with their hair uncovered to spark a debate the freedom to choose whether or not to wear the hijab."
Posted by GRB at 17:54

Rouhani on the web

Mehrdad Balali, IOL SciTech, Time to embrace internet, Iran leader says, 27 May 2014 "Iran should embrace the Internet rather than see it as a threat, President Hassan Rouhani has said, in remarks that challenge hardliners who have stepped up measures to censor the Web."
Posted by GRB at 17:48

vocativ.com, Now Available in the Android Store: An App for Terrorists "The Islamic State of Iraq and al-Sham (ISIS)—a jihadi group that even Al Qaeda’s leadership severed ties with for being too extreme—has blazed new trails in cyberspace. Its app, paradoxically called Fajer Al Bashaer (Dawn of Good Omens), delivers news and links to articles about ISIS “successes” in Syria, where the group is based. The app’s developers say their goal is to “assist the victory of the Islamic state by conveying its messages to Muslims everywhere.”"

Strategy Page, Counter-Terrorism: The Electronic Jihad "In April 2014 a Moslem man (Lawal Olaniyi Babafemi) from Nigeria pled guilty in an American court to charges that he had participated in an al Qaeda operation in Yemen to promote Islamic terrorism via the Internet. Babafemi faces up to 30 years in jail for going to Yemen in 2010 and joining al Qaeda. He later returned to Nigeria and was arrested there and extradited to the United States in 2013. He is one of an increasing number of Islamic terrorist sympathizers who stay out of the battleground areas and provide support via the Internet. Terrorist leaders now recognize this sort of support is important for jihad (struggle) and it is encouraged."
Posted by GRB at 13:15

Belfast Telegraph, Concerns over online extremism, 21 May 2014 " Fears have been raised about online extremism a year after the death of soldier Lee Rigby, as deadly jihadist material remains widely available online."
Posted by GRB at 13:10

Registan, The Central Asia Digital Islam Project: How the Internet and Social Media are Reshaping the Islamic Marketplace in Central Asia "Advances in communications technology and large-scale migration are rapidly eroding these obstacles, however, allowing Central Asians to increasingly participate in trans-national Islamic discourses through digital media."
Posted by GRB at 13:02

Guardian, Aleppo's most wanted man - the rebel leader behind tunnel bombs "The giant plumes of dirt and rubble that ballooned several hundred metres skyward as the hotel crumbled, killing 30-50 Syrian troops, have fast become one of the most jaw-dropping images of Syria's civil war. In three years of aerial blitzes, scud missiles, chemical attacks and suicide bombs, little else had been captured so spectacularly and in real time (video).

"That was one of the best things about the operation," said Assad. "The effect on morale was immediate. Ever since, the men have wanted to fight more than before. We have called this "Operation Aleppo Earthquake".
Posted by GRB at 12:54

Email ThisBlogThis!Share to TwitterShare to FacebookShare to Pinterest
Labels: Syria

BBC, Iranian Pharrell fans arrested for Happy tribute video "A group of Iranian fans who created a tribute to Pharrell Williams' hit song Happy have been arrested."
Posted by GRB at 12:43

Guardian, Abu Hamza found guilty of 11 terrorism charges, 20 May 2014 "Hamza was accused of being a terrorist of global reach, and was charged with providing material support to terrorist organizations by enabling hostage-takers in the Yemen kidnapping to speak on a satellite phone, by sending men to establish an al-Qaida training camp in Bly, Oregon, and by sending at least one man to training camps in Afghanistan."
Posted by GRB at 12:54

Saudi Gazette, alarabiya.net, Saudi interior ministry plans to recruit hackers, 14 May 2014 "The National Information Center of the Saudi Ministry of Interior is planning to employ native hackers in its efforts to define holes in the electronic networks in the Kingdom."
Posted by GRB at 13:05

Some of the reactions online are shown below: 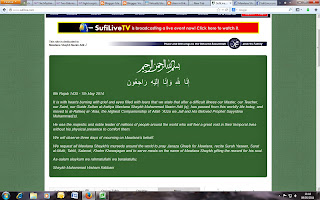 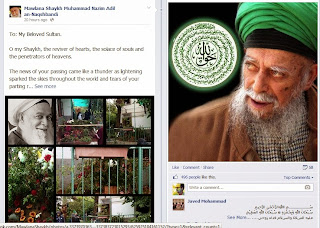 KSA, English language and the net

Arab News, Winds of change: English teaching in Saudi Arabia, 9 May 2014 "For several years now, English has been touted to be an important lingua franca in many countries where it is widely used as a means of communication among various ethnic groups and people of different backgrounds. The advent of the Internet has only reinforced its eminence where almost 30 percent of the data is in English. In addition, most of the world’s music is in English (although this is debatable) while job opportunities are certainly better in non-English speaking countries with good salaries and perks."
Posted by GRB at 11:30

Central Asia Online, Kyrgyzstan seeks to stem recruitment for Syrian war "While the Kyrgyz government attempts to curtail the exodus of young men joining the war in Syria have yielded some effect, social network users are still vulnerable to external influence online."
Posted by GRB at 11:29

CBS News, Nigeria schoolgirl kidnapping boosts Boko Haram's online presence, for better or worse "While the reaction has been a mix of support and condemnation of the group's kidnapping of almost 300 teenage girls from their school in the northern Borno province, the overall outpouring of interest seems to have elevated the group to a more equal footing with other al Qaeda affiliates -- at least on the vital modern battlefield of the Internet."
Posted by GRB at 11:28

Radio 4, The Report, 'Jihadi Converts' "Converts to Islam are far more likely to be involved in terrorist incidents than those who were born into Muslim families: converts account for around a quarter of terrorist convictions in Britain since 9/11 yet they represent only 2-3% of the UK's Muslim population."
Posted by GRB at 11:26

National Turk, Medieval Justice in Saudi Arabia: Ten years imprisonment and 1,000 lashes for blogger Raif Badawi, 8 May 2014 "Now, an appeals court in the port city of Jeddah has tightened the punishment again. The judge sentenced the blogger on Wednesday to ten years in prison and 1,000 lashes. In addition, he shall pay a fine in the amount from the equivalent of just under 200,000 euros."
Posted by GRB at 11:23

Telegraph, Abu Hamza trial: hate preacher says British wife persuaded him to turn to Islam "It was his first wife, an Englishwoman, who persuaded him to start to study Islam with her because she became interested in the religion, he explained. “She was persistent,” he said. “She pushed too hard.”"
Posted by GRB at 11:18

Techie News, WhatsApp faces ban in Iran over 'American Zionist' Zuckerberg "Abdolsamad Khorramabadi, head of the country’s Committee on Internet Crimes, announced the ban, saying that “the reason for this is the adoption of WhatsApp by the Facebook founder Mark Zuckerberg, who is an American Zionist.”"
Posted by GRB at 17:42

arabnews.com, Disillusioned ‘jihadi’ gets death threats for exposing recruiters "Blurring the line between reality and fiction, a former member of a terrorist group has made a movie slamming those in the Kingdom who recruit young Saudis to fight abroad." I have yet to see the film (which is linked into this report).
Posted by GRB at 17:40

Allegations: "Islamic Cleric From Michigan Is a Top Online Figure for Jihadists in Syria"

The Blaze, Islamic Cleric From Michigan Is a Top Online Figure for Jihadists in Syria "Ahmad Jibril, who was released from prison in 2012 after serving time for fraud, began his online sermons just as Al Qaeda extremists began flooding into the civil war in Syria." Allegations.
Posted by GRB at 17:39

Sky News, British Fighters Filmed In Syria 'War Crime' "They [ICSR] believe the man that posted the video is part of a group of British fighters, known as Rayat al Tawheed, an affiliate of the Sunni jihadi movement ISIS, which controls large swathes of northern Syria."
Posted by GRB at 16:07

The latest challenge of ‘The 99’ superheroes is tackling a fatwa

The latest challenge of ‘The 99’ superheroes is tackling a fatwa | The National "It began as a suspicious relationship. I did not expect approval to begin with, and the suspicion of the Saudi authorities over the (to them) subversive nature of the content meant we were at loggerheads. It turned out that the solution was simple. I had to first get approval from a religious authority for my superheroes to fly in the Kingdom."

Palestinian activist given house arrest for a Facebook status