App used in battles against Islamic State `was a game changer´

Press Association/Daily Mail, App used in battles against Islamic State `was a game changer´, 18 Feb 2018 "An app created using a map seized from Islamic State was a “game changer” in the battle to defeat the extremists in Raqqa, a British man who fought the murderous group has said."
Posted by GRB at 16:24

Board game in Mecca controversy The New Arab, Protect Shia shrines from IS jihadists in latest Hizballah video game ""Holy Defence" is the latest Hizballah-inspired shooter based on the Lebanese militant group's recent battles against the jihadist group in Syria and at home."

Stepfeed, Package containing 'witchcraft spell' found in Medina... authorities undo it This issue became the subject of online discussion.
Posted by GRB at 14:59

Egyptian woman beats her harasser, gets him arrested and goes viral

Stepfeed, Egyptian woman beats her harasser, gets him arrested and goes viral "In a video capturing the incident, the woman can be seen chasing after the man, then calling on passersby to help her stop him from escaping. Her attempts at getting the man arrested succeeded and he was eventually handed over to police."
Posted by GRB at 14:57

Mail Online, Iran may be using ‘weaponized' apps available on the App Store and Google Play to spy on MILLIONS of people around the world, report claims, 15 Feb 2018 "The report [from the National Council of Resistance of Iran] claims that the Islamic Revolutionary Guard Corps (IRGC) has created spyware-enabled apps for 'cyber-surveillance and repression' that are available on the App Store, the Google Play Store and GitHub with the goal of 'monitoring and preventing' new political uprisings."
Posted by GRB at 13:44

CTC, A View from the CT Foxhole: Neil Basu, Senior National Coordinator for Counterterrorism Policing in the United Kingdom Long interview.
Posted by GRB at 13:41

Morocco: “The women scholars here are even more important than men.”

Dina Temple-Raston, The Female Quran Experts Fighting Radical Islam in Morocco "The morchidat program leverages a woman’s familial and social influence to combat radical Islam at the level of the sidewalks—and at individual mosques. “We’ve found over the years that if we have women organize something at the mosque, 450 people show up. If the men are put in charge, they’re lucky if 25 guys make the effort,” El-Azaar said."
Posted by GRB at 15:59

David Patrikarakos, Independent, War in 140 characters: How social media has transformed the nature of conflict, 14 Feb 2018 "It was the reinvention of reality, and the likes of Twitter and Facebook were at its heart. In an extract from his latest book, author and journalist David Patrikarakos says we need a new narrative to understand where battlefield now lies."
Posted by GRB at 15:56

Stepfeed, Saudi students expelled from university for taking photos on their phones
Posted by GRB at 15:00

VOA, Iran Controls Information with Halal Net, 9 Feb 2018 "In the past four years, Iranian officials have permitted wider use of the internet, hoping that will help create a modern economy. Today, almost half the population has smartphones. This means they also have cameras and internet links permitting broadcast by anyone to anywhere."
Posted by GRB at 12:04

VOA, Germans Shocked by Young Jihadists, 11 Feb 2018 "Now, a top German official is calling for cancellation of laws restricting security surveillance of children under the age of 14. Hans-Georg Maassen is the head of the country’s domestic intelligence agency. He argues that Germany is facing serious risks from what the media calls “kindergarten jihadists.”"
Posted by GRB at 12:02

The Conversation, Robots, kittens and Netflix: Turkish curbs on the media reach ludicrous levels, 9 Feb 2018 "Citizens of Turkey have long bypassed existing internet regulations by using VPN (Virtual Private Network) and other methods to get round the blockage of certain websites. The latest draft decree certainly points to a further step towards a dystopian future for Turkish freedom of expression and human rights, but it could also instigate new imaginings for the future of social and digital change." Opinion
Posted by GRB at 15:55

Deutsche Welle, Iranian women defiant against compulsory hijab, 6 Feb 2018 "A new wave of protests against the compulsory wearing of hijab has spread across Iran, resulting in the arrests of dozens of women. The government has accused the protesters of being under the influence of drugs."
Posted by GRB at 19:34

BBC News, Click, Law and Order: Dubai Tech and surveillance in Dubai: "Click is in Dubai meeting the newest members of the police force, police Bots."
Posted by GRB at 19:26

How the internet 'punishes' Palestinians

Al Jazeera, How the internet 'punishes' Palestinians "In the past two years, Palestinians launched several campaigns accusing tech companies of discrimination and bias, with hashtags such as #FBCensorsPalestine and #PayPalForPalestine going viral."
Posted by GRB at 19:21

Islam, Women and Me

Mehreen Baig's very personal documentary, which includes a visit to a 'Sharia Council', a discussion on dating apps, and her negotiations with her father about moving out ... The programme is available on iPlayer for the next month.

Daily Mail, Hollywood director's British son who converted to Islam and joined al-Qaeda calls for more recruits to join him in Syria in new propaganda video, 5 Feb 2018
Posted by GRB at 16:06

Siddharthya Roy, The Diplomat, Bangladesh's New Generation of Militants, 29 Jan 2018 "Providing propaganda, inspiration, and tutorials through shareable videos, audio sermons, e-magazines, and other digital content is the main trade of the Islamic State in South Asia. There is next to no coercion or monetary compensation. Individuals go from being the boy/girl next door to a terrorist almost entirely on their own effort. All the Islamic State does is provide a template to which vulnerable individuals mold themselves and content which inspires and educates." Opinion and analysis
Posted by GRB at 11:53

The Guardian, Finsbury Park attack: man 'brainwashed by anti-Muslim propaganda' convicted, 1 Feb 2018 "The Guardian understands a review has been launched into the extreme right by the Joint Terrorism Analysis Centre. Sources say it is assessing how determined they are to kill, how able they are to murder, what their motivations are, and how they spread their propaganda and get recruits." See my Islam in Britain blog for more on this case
Posted by GRB at 11:49

Guardian, Tehran hijab protest: Iranian police arrest 29 women, 2 Feb 2018 "One recent image taken from Mashhad shows a religious woman, in full chador, standing on a telecoms box holding up a headscarf, in solidarity with women who - unlike her - don’t want to wear it." 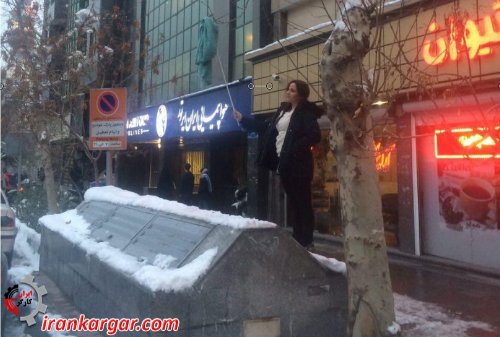 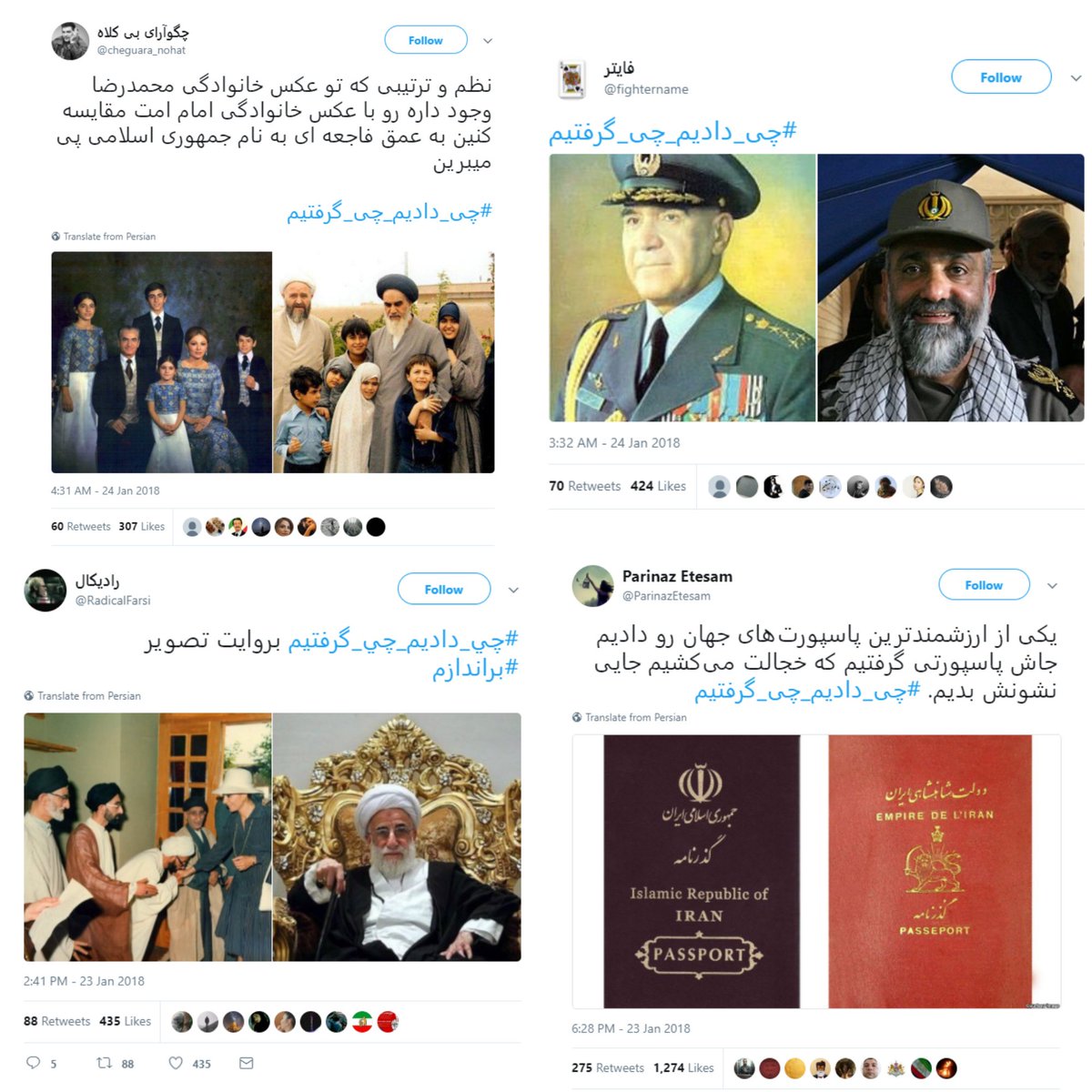 BBC Trending, Iranians compare Shah's regime with clerics'  "The hashtag has been used more than 25,000 times since Tuesday. Of those few tweets with their location tagged or verified, most were coming from in or near Iran, with a fair share from countries such as the US, the UK and Germany, which have large Iranian communities."

Newsweek, Iran on Twitter: Persian Users Made This Hashtag go Viral, 27 Jan 2018 "Following the recent anti-establishment protests across the nation, Iranians have taken to Twitter to compare the country before the 1979 revolution with Iran today, making the hashtag #What_we_gave_vs_what_we_got go viral."

The slow death of al-Qaeda in Algeria

Middle East Eye, The slow death of al-Qaeda in Algeria

"In Algeria this week, Abu Rouaha al-Qassantini - real name Adel Seghiri - was killed by the Algerian army in Jijel, about 400km from Algiers.

"He was the propaganda chief of AQIM, creator of the al-Andalus magazine and mastermind of the propaganda forum "Ifriquya al-Islamiyah" (Islamic Africa), which acted as message board between groups in the region and al-Qaeda in the Middle East."

Email ThisBlogThis!Share to TwitterShare to FacebookShare to Pinterest
Labels: al-Qaeda, al-Qaeda in the Islamic Maghreb, Algeria

The bureaucracy of evil: how Islamic State ran a city